This week was a bit varied with the tasks I had at hand – the main feature being the hype meter.

The last key wrestling mechanic to our game is the hype meter. Hype is different from your typical fighting game super meter, in that it is affected by specific, crowd pleasing in game events. Break out of a pin at the third count? You’ll get hype. Hit an opponent with a risky top rope move? You’ll get A LOT of hype. After reaching maximum hype, your character will enter Max Mode, and gain access to new attacks and abilities. I’ll go into Max Mode another day. 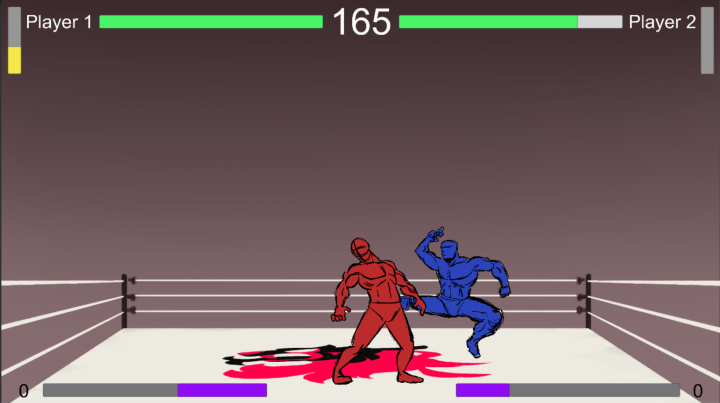 The yellow bar on the side is hype. Yes, UI is a work in progress.

The hype events themselves are working, with designer orientated tools to customize how much hype certain events bring. Max Mode will come another day, since it’s character specific and our first full fledged character is currently under development.

I also worked on implementing a sound manager. Sounds are key to game feel, and it’s gonna be one of the things we’re going to be doubling down on in the coming weeks. 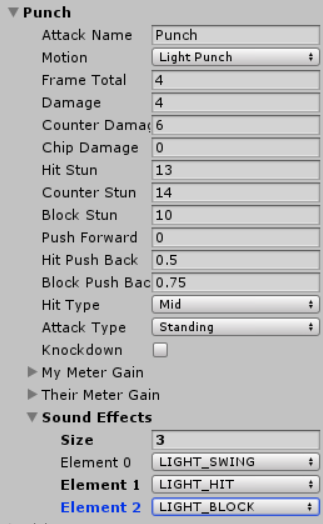 I took some time to expand the designers tool set to also let him customize what sound effects play during specific attack events. Sounds that happen on miss, attack, and block are all easily customizable in editor. This will help each move feel unique and have personality, while letting our designer quickly iterate on game feel. I plan to have a similar system for particle effects.

The other things I worked on this week involved a bunch of small tweaks, bug fixes, and loose ends I had tie up mechanically from weeks ago. Since none are particularly interesting, I thought I’d be a good week to jot down some thoughts about the current team dynamic.

So far I have been working extremely close with the designer. We’re always bouncing off ideas as to how to implement mechanics and we always have a ton of fun play testing the game together. I don’t think the game would be anywhere near as cohesive and put together as it is right now without me and the designer communicating constantly. It’s a good thing we get along great!

Art wise I haven’t been as close with them but I imagine that’ll change soon as the game makes its big transition to 3D models. As a programmer, I want to make sure everyone’s hard work gets represented the way it’s meant to. This applies to both design and art. On that end, I look forward to trying out shaders and such with the artists to make sure we can make the team’s artistic vision a reality. I also applaud our art team for their communication early on about the feasibility between a 2D sprite pipeline and a 3D pipeline. Without going too much into the thick of it, their input in our vital pipeline planning phase probably saved our game.

Production wise – I absolutely adore having a dedicated producer. While other teams have to juggle some roles, our team has the fortune of having someone completely dedicated to running meetings, documenting deadlines, planning ahead, and most importantly – facilitating communication. It allows me to just focus on my own tasks, and that is a huge time saver.

Overall, while we had our initial difficulties, I’m a huge fan of our team, and I don’t think this incredibly challenging game would be possible without everyone giving it their all. I’m proud of everyone so far and I’m sure that feeling will only grow as the weeks go on.

Although we don’t have 3D models in game to show this week, the work is well underway – and I expect next week to be the first stage of our games transformation. It’s going to be sick.